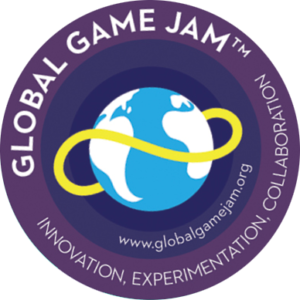 We participated in Global Game Jam Athens ’17. It was our first time participating a game jam and we were amazed! We met passionate designers, artists, coders, musicians who happen to be beautiful people and worked alongside for 48 inside Zapeio Megaro -a historic place of modern Athens! We particularly collaborated with  Alex Koxaras of Origins of Audio, a very talented musician who provided a playful and well matching soundtrack for our game 🙂 Thanks Alex!
Listen more of Alexandros music: soundcloud.com/alexkoxaras

Pebbles Waves’,  is a casual game with puzzle platform essence and is based on a very simple idea; entropy. What if we threw a pebble in a lake and with that move we could save a caterpillar through her adventurous journey with a leave as vessel?

Gameplay
Throw pebbles inside the lake to create waves which will push the leaf and lead the caterpillar to safety. Avoid the lilies and the vortices and survive the frogs.